The Tears of the Bull

Gil Gutiérrez composed this haunting song Lagrima del Toro in 2006 after reading an article about the murders of women in Ciudad Juarez. To date 1000 women including students, factory workers, shop clerks and prostitutes have been murdered and their bodies dumped in the desert. Hundreds more have simply vanished.

Music, movies, art and books have demanded justice for these women and their families. Amnesty International believes that this pattern of violence against women is complex and Mexican authorities have failed to prevent and punish those responsible. Since the murders began in 1993 the families of the victims have struggled tirelessly for justice and brought national and international attention to the issue.

Gil described the idea for this song like a tapestry that was woven over the course of a year. He designed a map of where he wanted to go with the notes and built the melody slowly to communicate the frustration, grief and powerlessness many feel about this issue. Gil on guitar was joined by Doc Severinsen on trumpet, Charlie Bisharat on violin, Jimmy Branly playing percussion, Eugenio Toussaint on piano and Kevin Thomas on bass before a sold out crowd at the Teatro Angela Peralta in San Miguel de Allende, Mexico. Special thanks to Gonzalo Cabrera who put this video together.


Lagrima del Toro is dedicated to the lost women
of Ciudad Juarez.
Posted by Gil Gutierrez Music at 10:29 AM No comments:

We're off to Carnegie Hall in New York! 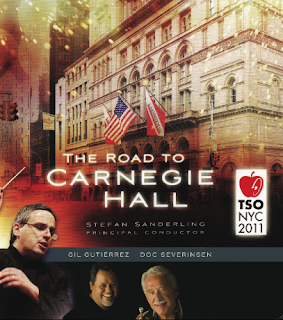 We are thrilled to let you know we will be playing at Carnegie Hall with The New York Pops, conducted by
the gifted Music Director Steven Reinecke
on Friday January 28, 2011 at 8:00pm.

Since its opening in 1891, this venue has been the premier classical music performance space in the United States featuring the world’s greatest soloists, conductors, and ensembles. It has also been home to important jazz events. With its striking curvilinear design and the Perelman stage as the focal point, it has five levels of seating for up to 2,804 people. Why not join Gil, Doc and El Ritmo de la Vida for a stellar evening of music including Argentine tango, Spanish flamenco and Gypsy jazz? The world famous acoustics of Carnegie Hall have made it a favorite of audiences and performers.
Posted by Gil Gutierrez Music at 9:10 AM 1 comment: 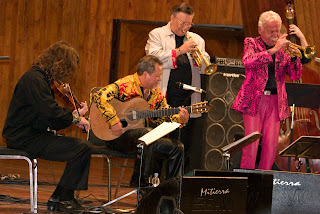 This invitation goes out to all our old and new friends.
Please join Doc and Gil & El Ritmo de la Vida concert,
in Mexico City D.F.

This very special concert is FREE so please join us for an unforgettable evening of music in Mexico City. 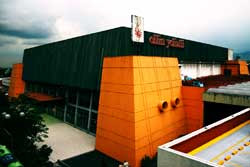 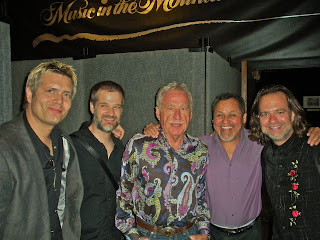 Gil and Doc are pleased to announce a series of exciting performances this Fall. Please join us in October.
You can catch El Ritmo de la Vida in the following cities:
October 9 in Toledo, Ohio with the Symphony Orchestra
October 14 in Scottsdale, Arizona
October 15 in Northridge, California
October 16 Kirkland, Washington
Posted by Gil Gutierrez Music at 8:17 PM 1 comment:

Gil & Jaime Valle at The Restaurant 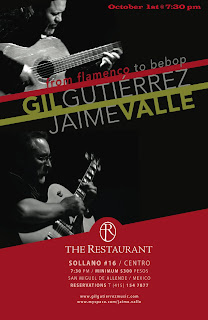 Gil and Jaime concoct an eclectic blend of music including the American songbook and Brazilian standards, flameno and gypsy jazz. Make sure to get reservations in advance by calling 415.154.7877.
Posted by Gil Gutierrez Music at 8:16 PM No comments:

El Farol at the Music in the Mountains Festival 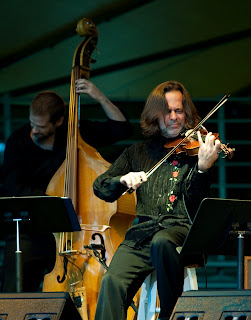 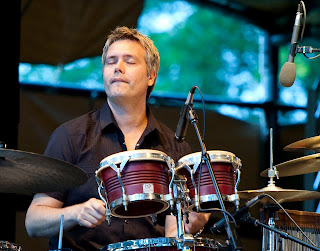 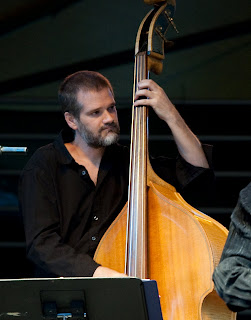 Friends: Thanks for joining El Ritmo de la Vida in Ohio this past September. We enjoyed connecting with you and appreciated the amazing performances of violin player Charlie Bisharat, Jimmy Branly on percussion and Kevin Thomas on bass.
Posted by Gil Gutierrez Music at 7:27 AM No comments: 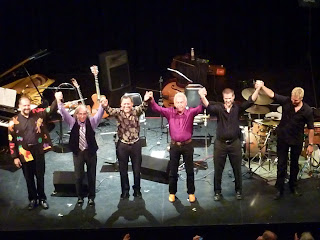 Toussaint, Cartas, Gil, Doc, Kevin Thomas and Jimmy Branly.
Thanks for such a memorable night.
Posted by Gil Gutierrez Music at 7:24 AM No comments:

Warmest thanks to friends and everyone who attended the sold out concert at the Angela Peralta Theatre in San Miguel de Allende Gto. on August 18th. What an incredible night it was!

During this song you could hear a pin drop and it features Pedro Cartas on violin and Gil on guitar as they conjure the spirit of the dove in this haunting legend.

A Mexican Huapango written by Tomás Méndez "Cucurrucucu paloma" was introduced by Lola Beltrán in the film Cucurrucucu Paloma. This mesmerizing song recounts the legend of a dove who every morning comes to sing at a woman's empty little house with its wide open little doors. They swear that the dove is none other than the man's spirit, hoping still for the return of the woman he so passionately loves.

They say that every night
he was wholly overtaken by tears;
They say he never ate, but only drank.

They swear that even the heavens
trembled to hear his wail,
he suffered for her so,
that even in death, he never stopped calling for her.

These videos are of live performances with the New York Choral Society under the direction of conductor Jack Goodwin. Sixty voices of the renowned New Your City Choral Society joined forces with Gil to perform in Oaxaca at the Macedonio Alcala, San Miguel de Allende at the Tercera Orden Church, and Teatro Juarez in Guanajuato. Original music included the compelling song Delfis composed in honor of Gil's mother.

Four years ago after reading a newspaper article about the women killed in Ciudad Juarez Gil wrote Lagrima del Toro using a metaphor of an impotent bull to express the powerlessness many people feel about these brutal murders. The victims have predominatly been young women, between 12 and 22 years of age. Many were students, and most were maquiladora workers and to this day these horrible crimes remain unsolved.

The song Xilitla commemorates a uniquely beautiful place in La Huasteca Potosina, a verdant jungle at sea level in the mountains.
Posted by Gil Gutierrez Music at 6:29 PM 1 comment:

Gil and Doc played to an enthusiastic crowd of 10,000 people at Chicago's Millenium Park during Las Fiestas del Bicentenario. These photos show the theatre designed by Frank Gehry and the electrifying performance of Ritmo de la Vida. 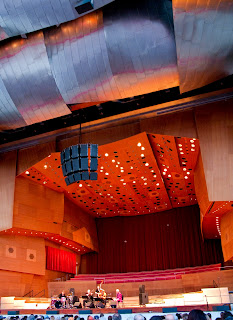 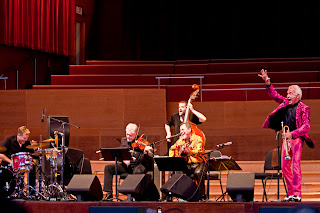 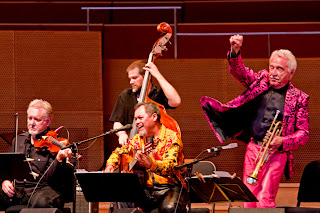 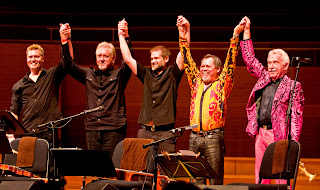 Posted by Gil Gutierrez Music at 6:07 PM No comments:

Please join Gil, Doc y Cartas for an evening of very special music on Wednesday night August 18th at the Teatro Angela Peralta in San Miguel de Allende, Mexico. The show starts at 7:30 and tickets are available at the theatre box office.

Listen to old favorites and some incredibly dynamic new music. Gil y Cartas and the legendary trumpet player Doc Severinsen will be joined by Eugenio Toussaint on the piano, Jimmy Branley from Cuba playing percussion as well as bassist Kevin Thomas from New York City. 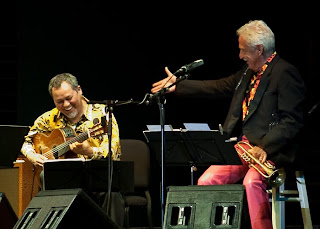 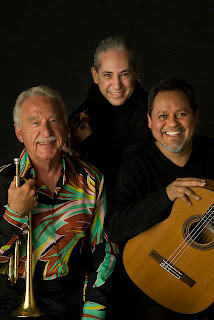 Posted by Gil Gutierrez Music at 5:54 PM No comments:

Thanks to everyone who attended the two sold out concerts at the Instituto Alllende in San Miguel de Allende. We had a great time making music and connecting with our friends. 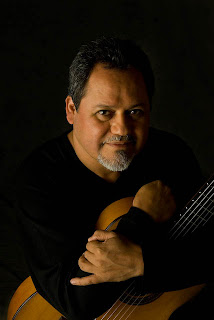 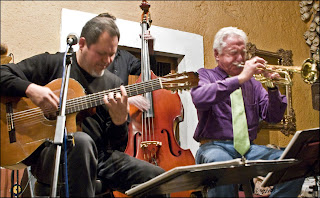 Posted by Gil Gutierrez Music at 7:14 AM No comments:

You can catch Gil's latest music on the new cd "El Ritmo de la Vida" which means "the rhythm of life," featuring legendary trumpet master Doc Severinsen. Gil's virtuoso guitar is classical Spanish with a jazz flair, there are gorgeous ballads, both Latino and American, and gypsy jazz, a la Django Reinhardt. 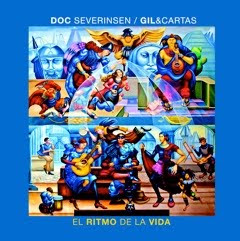 Posted by Gil Gutierrez Music at 7:38 PM No comments:

El Ritmo de la Vida hits the road this February. Come hear the magic for yourself. 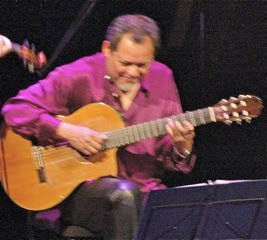 Posted by Gil Gutierrez Music at 7:22 PM No comments: